Here we use a slow light quantum light-matter interface at room temperature to implement an analog simulator of complex relativistic and topological physics. We have realized the famous Jackiw-Rebbi model (JR), the celebrated first example where relativity meets topology. Our system is based upon interacting dark state polaritons (DSP’s) created by storing light in a rubidium vapor using a dual-tripod atomic system. The DSP’s temporal evolution emulates the physics of Dirac spinors and is engineered to follow the JR regime by using a linear magnetic field gradient. We also probe the obtained topologically protected zero-energy mode by analyzing the time correlations between the spinor components. Our implementation paves the way towards quantum simulation of more complex phenomena involving many quantum relativistic particles. 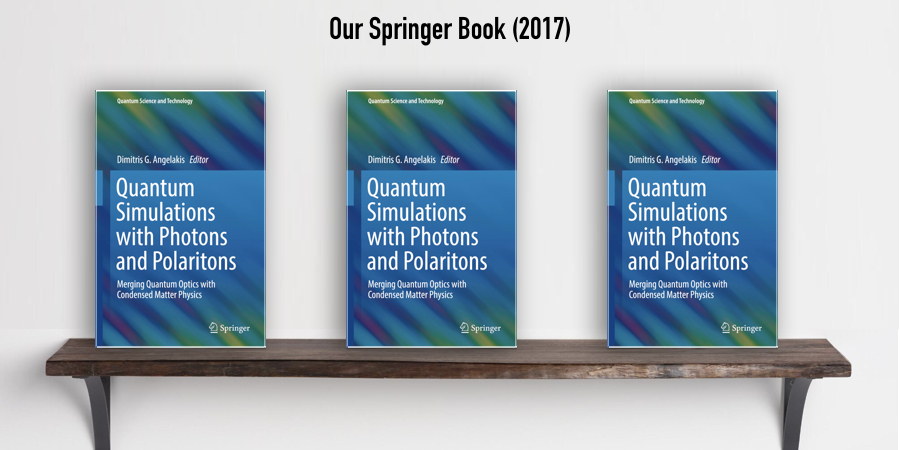 Check our book on “Quantum Simulators with Photons and Polaritons: Merging Quantum Optics with Condensed Matter Physics” by Springer! 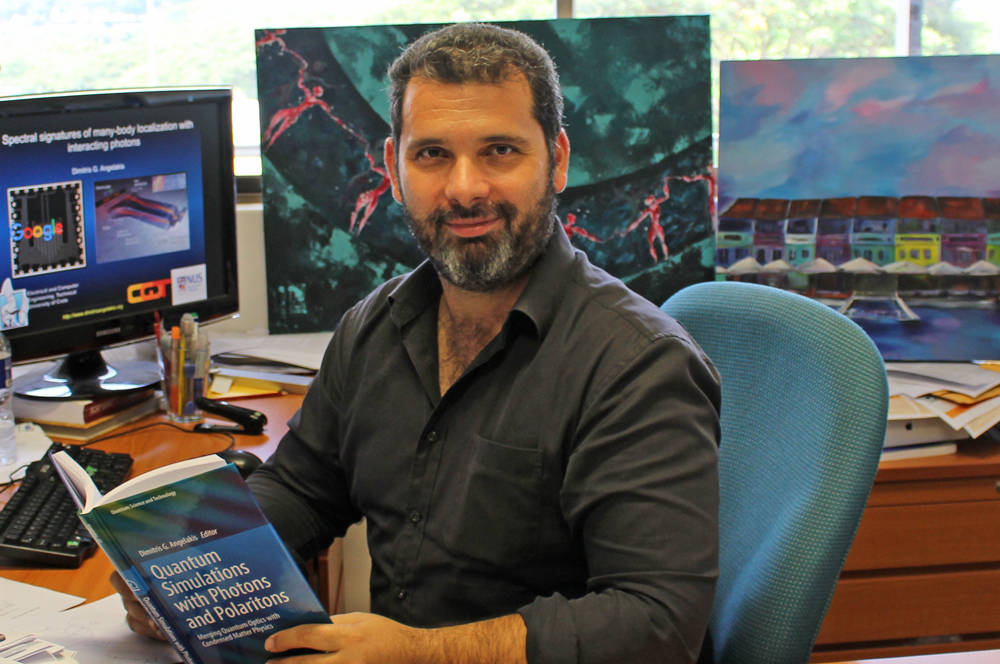 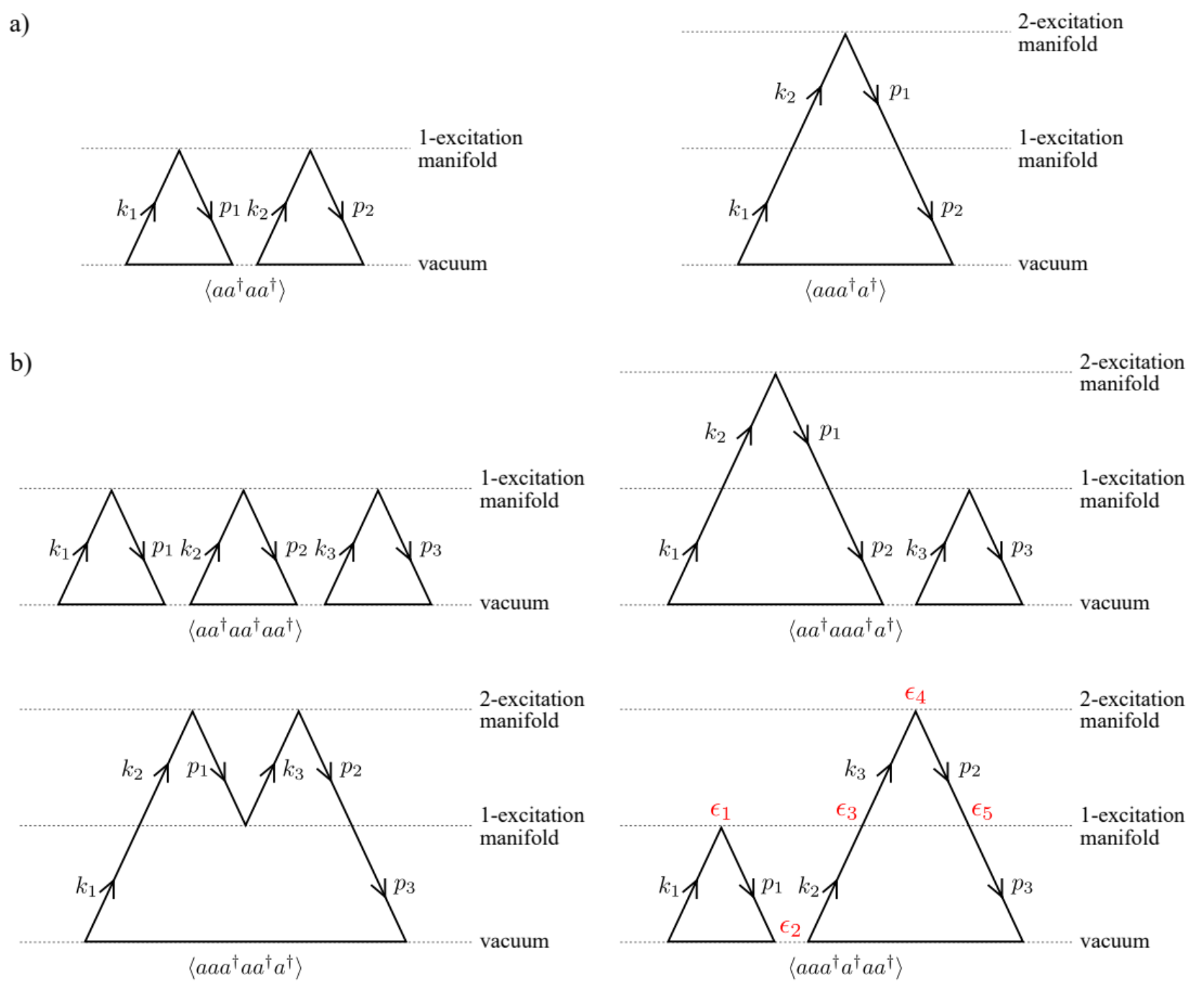 We present a method to systematically study multiphoton transmission in one-dimensional systems comprised of correlated quantum emitters coupled to input and output waveguides. Within the Green’s function approach of the scattering matrix (S matrix), we develop a diagrammatic technique to analytically obtain the system’s scattering amplitudes while at the same time visualize all the possible absorption and emission processes. Our method helps to reduce the significant effort in finding the general response of a many-body bosonic system, particularly the nonlinear response embedded in the Green’s functions. We demonstrate our proposal through physically relevant examples involving scattering of multiphoton states from two-level emitters as well as from arrays of correlated Kerr nonlinear resonators in the Bose-Hubbard model. 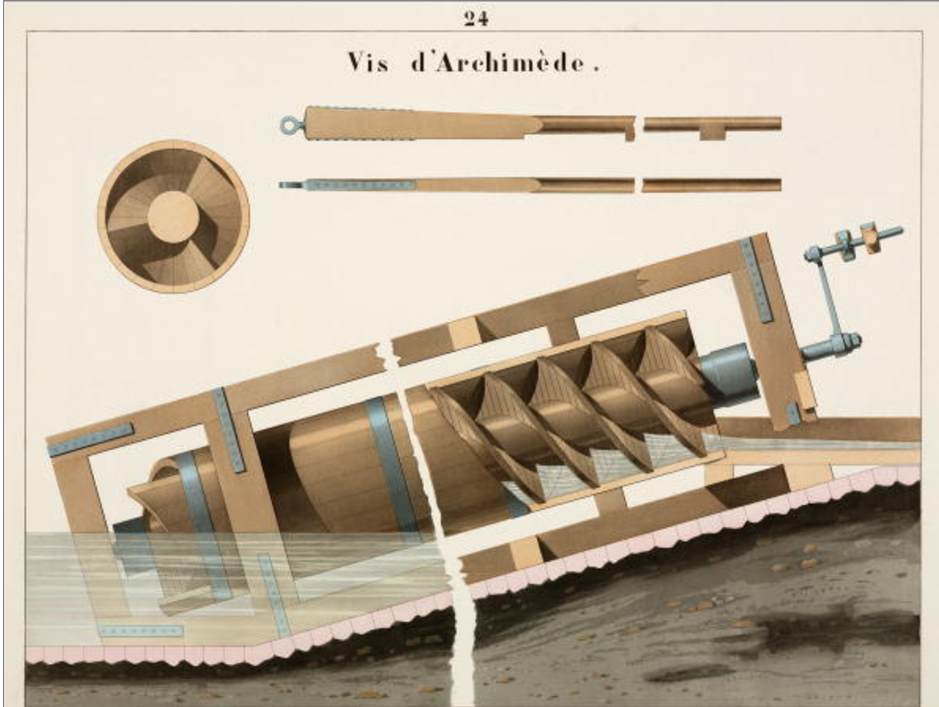 We show how to implement topological or Thouless pumping of interacting photons in one-dimensional nonlinear resonator arrays by simply modulating the frequency of the resonators periodically in space and time. The interplay between the interactions and the adiabatic modulations enables robust transport of Fock states with few photons per site. We analyze the transport mechanism via an effective analytic model and study its topological properties and its protection to noise. We conclude by a detailed study of an implementation with existing circuit-QED architectures.

Our comprehensive review on “Quantum Simulations and Many-Body Physics with Light” is out at  Reports in Progress in Physics 80, 016401 (2016).

In this review we discuss the works in the area of quantum simulation and many-body physics with light, from the early proposals on equilibrium models to the more recent works in driven dissipative platforms.. We review the major theory results and also briefly outline recent developments in ongoing experimental efforts involving different platforms in circuit QED, photonic crystals and nanophotonic fibers interfaced with cold atoms. 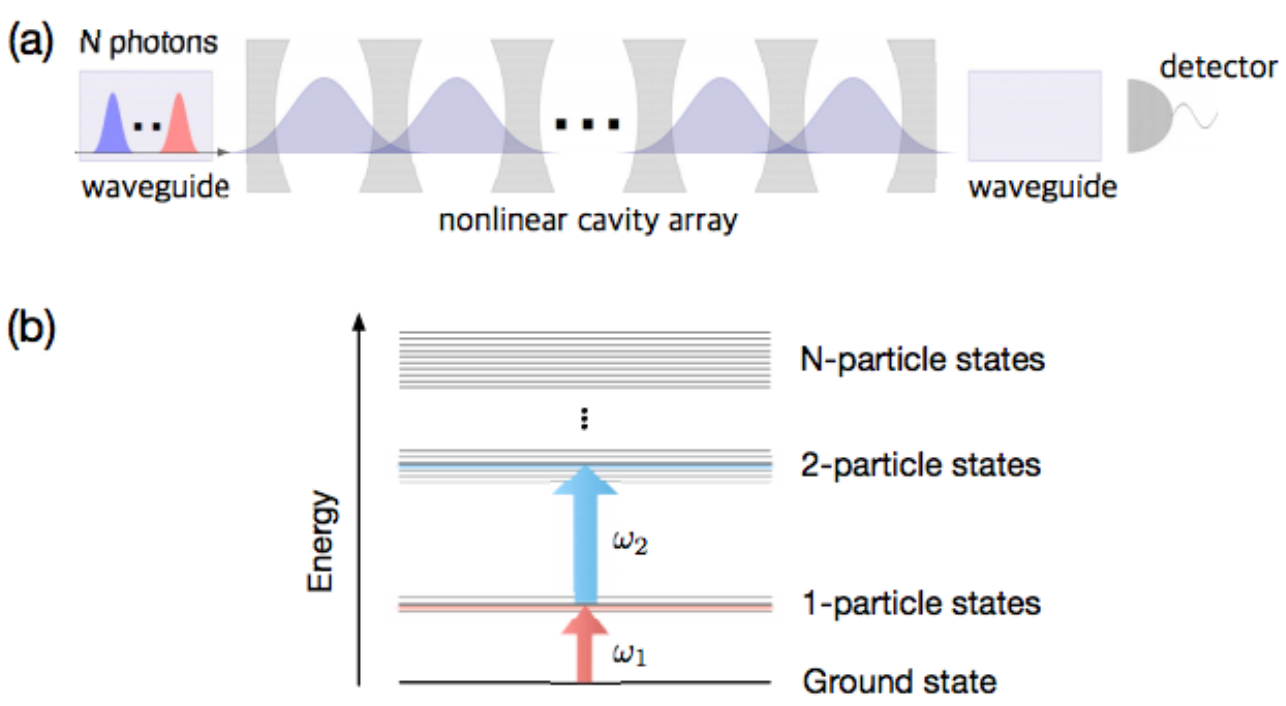 With the help of two-photon scattering matrix of in- and out-states, we find that the use of quantum input states in photonic quantum simulators such as those implemented in coupled cavity arrays, allows one to observe not only stronger spectroscopic signals of the underlying strongly correlated states but also a faithful representation of their intensity-intensity correlations, as compared to the conventional classical driving fields. Our analysis can be applied for many-body spectroscopy of any many-body model amenable to a photonic quantum simulation,  including the Jaynes-Cummings-Hubbard, the extended Bose-Hubbard, and a whole range of spin models.

We study the quantum transport of multiphoton Fock states in one-dimensional Bose-Hubbard lattices implemented in QED cavity arrays (QCAs). We propose an optical scheme to probe the underlying many-body states of the system by analyzing the properties of the transmitted light using scattering theory. To this end, we employ the Lippmann-Schwinger formalism within which an analytical form of the scattering matrix can be found. The latter is evaluated explicitly for the two-particle, two-site case which we use to study the resonance properties of two-photon scattering, as well as the scattering probabilities and the second-order intensity correlations of the transmitted light. The results indicate that the underlying structure of the many-body states of the model in question can be directly inferred from the physical properties of the transported photons in its QCA realization. We find that a fully resonant two-photon scattering scenario allows a faithful characterization of the underlying many-body states, unlike in the coherent driving scenario usually employed in quantum master-equation treatments. The effects of losses in the cavities, as well as the incoming photons’ pulse shapes and initial correlations, are studied and analyzed. Our method is general and can be applied to probe the structure of any many-body bosonic model amenable to a QCA implementation, including the Jaynes-Cummings-Hubbard model, the extended Bose-Hubbard model, as well as a whole range of spin models. 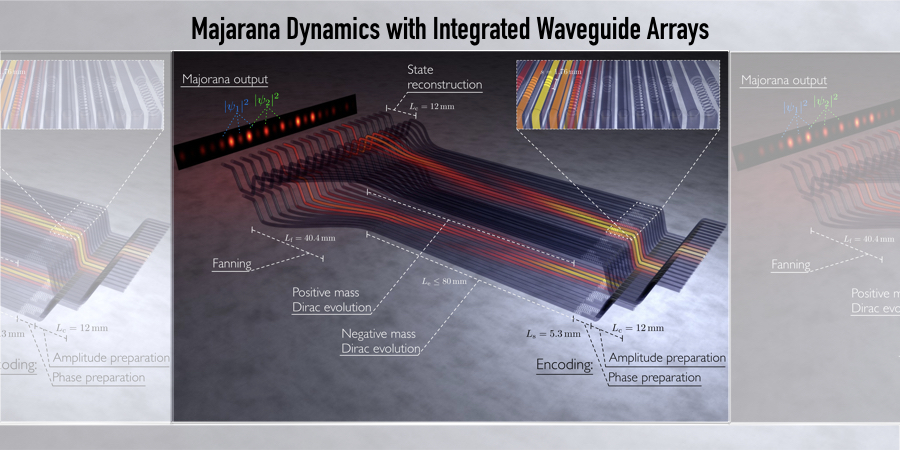 “Forbidden physics has been seen in an experiment – sort of. CQT researchers and collaborators in Germany, Austria and India simulated with light the behaviour of an impossible particle known as a Majoranon…”
Read more from CQT highlight for non specialists, ” Light mimics forbidden particle “

This work was chosen for a focus article in Οptics & Photonics News (OPN)  “Using light to simulate unphysical particles”. ! It has also appeared in the Science Section, International Business Times, as well as phys.org  and sciencedaily

Unphysical solutions are ruled out in physical equations, as they lead to behavior that violates fundamental physical laws. One of the celebrated equations that allows unphysical solutions is the relativistic Majorana equation, thought to describe neutrinos and other exotic particles predicted in theories beyond the standard model. The neutrally charged Majorana fermion is the equation’s physical solution, whereas the charged version is, due to charge nonconservation, unphysical and cannot exist. Here, we present an experimental scheme simulating the dynamics of a charged Majorana particle by light propagation in a tailored waveguide chip. Specifically, we simulate the free-particle evolution as well as the unphysical operation of charge conjugation. We do this by exploiting the fact that the wave function is not a directly observable physical quantity and by decomposing the unphysical solution to observable entities. Our results illustrate the potential of investigating theories beyond the standard model in a compact laboratory setting.