The ability to control individual quantum systems in customised setups and materials, is paving the way for a quantum second revolution where the fundamental notions of quantum superposition and quantum entanglement will be an integral part of the inner workings of operational quantum devices. These will include  quantum computers and simulators, quantum sensors and quantum communication systems. In our group we are working in all aspects of quantum technologies, from the basic science behind them all the way to co-developing operating devices. Our special interest is in quantum simulation and computation In this direction, we study and develop novel approaches in a variety of quantum platforms including superconducting quantum circuits, slow light, and integrated photonic chips.

Quantum supremacy is the ability of quantum processors to outperform classical computers at certain tasks. In digital random quantum circuit approaches for supremacy, the output distribution produced is described by the Porter-Thomas (PT) distribution. In this regime, the system uniformly explores its entire Hilbert space, which makes simulating such quantum dynamics with classical computational resources impossible for large systems. However, the latter has no direct application so far in solving a specific problem. In this work, we show that the same sampling complexity can be achieved from driven analog quantum processors, with less stringent requirements for coherence and control. More importantly, we discuss how to apply this approach to solve problems in quantum simulations of phases of matter and machine learning. Specifically, we consider a simple quantum spin chain with nearest-neighbor interactions driven by a global magnetic field. We show how quantum supremacy is achieved as a consequence of the thermalization due to the interplay between the disorder and the driven many-body dynamics. We analyze how the achieved PT distribution can be used as an accessible reference distribution to probe the many-body localization (MBL) phase transition. In the second part of our work, we show how our setup can be used for generative modeling machine learning tasks. We propose a novel variational hybrid quantum-classical approach, exploiting the system’s inherent tunable MBL dynamics, to train the device to learn distributions of complex classical data. The performance of our training protocol depends solely on the phase that the quantum system is in, which makes fine-tuning of local parameters not necessary. The protocol is implementable in a range of driven quantum many-body systems, compatible with noisy intermediate-scale quantum devices.

Classical computers require enormous computing power and memory to simulate even the most modest quantum systems. That makes it difficult to model, for example, why certain materials are insulators and others are conductors or even superconductors. R. Feynman had grasped this since the 1980s and suggested to use instead another more controllable and perhaps artificial quantum system as a “quantum computer” or specifically in this case a “quantum simulator”.

Here in collaboration with the Google Quantum Hardware group,  using a chain of nine superconducting qubits, we implement a technique for resolving the energy levels of interacting photons. We used this to probe a complex quantum phase of matter known as many-body localized phase, currently beyond the reach of classical approached. We benchmark our method by first capturing the main features of the intricate energy spectrum predicted for two-dimensional electrons in a magnetic field—the Hofstadter butterfly. We then introduced disorder to study the statistics of the energy levels of the system as it undergoes the transition from a thermalized to a localized phase.

Forbidden physics has been seen in an experiment – sort of. Here in  collaboration with the Szameit group in Germany,  we simulated with light the behaviour of an impossible particle of the Majorana equation, we name the  “Majoranon…” Unphysical solutions are ruled out in physical equations, as they lead to behavior that violates fundamental physical laws. One of the celebrated equations that allows unphysical solutions is the relativistic Majorana equation, thought to describe neutrinos and other exotic particles predicted in theories beyond the standard model. The neutrally charged Majorana fermion is the equation’s physical solution, whereas the charged version is, due to charge nonconservation, unphysical and cannot exist. Here, we present an experimental scheme simulating the dynamics of a charged Majorana particle by light propagation in a tailored waveguide chip. Specifically, we simulate the free-particle evolution as well as the unphysical operation of charge conjugation. We do this by exploiting the fact that the wave function is not a directly observable physical quantity and by decomposing the unphysical solution to observable entities. Our results illustrate the potential of investigating theories beyond the standard model in a compact laboratory setting.

Topological physics can greatly assist the design of advanced quantum systems and devices. Topological states are naturally protected against disorder and dissipation and can be used for a variety of tasks in quantum technologies.

We propose a novel hybrid platform where solid-state spin qubits are coupled to the acoustic modes of a two-dimensional array of optomechanical nano cavities. Previous studies of coupled optomechanical cavities have shown that in the presence of strong optical driving fields, the interplay between the photon-phonon interaction and their respective inter-cavity hopping allows the generation of topological phases of sound and light. In particular, the mechanical modes can enter a Chern insulator phase where the time-reversal symmetry is broken. In this context, we exploit the robust acoustic edge states as a chiral phononic waveguide and describe a state transfer protocol between spin qubits located in distant cavities. We analyze the performance of this protocol as a function of the relevant system parameters and show that a high-fidelity and purely unidirectional quantum state transfer can be implemented under experimentally realistic conditions. As a specific example, we discuss the implementation of such topological quantum networks in diamond based optomechanical crystals where point defects such as silicon-vacancy centers couple to the chiral acoustic channel via strain. 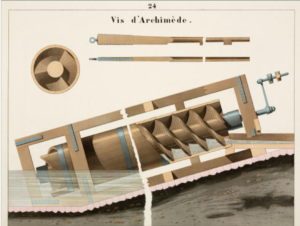 We have recently put forward a scheme that can reliably transport quantum states of a few photons along a line of miniature quantum circuits. More specifically we show how to implement topological or Thouless pumping of interacting photons in one-dimensional nonlinear resonator arrays by simply modulating the frequency of the resonators periodically in space and time. The interplay between the interactions and the adiabatic modulations enables robust transport of Fock states with few photons per site. We analyze the transport mechanism via an effective analytic model and study its topological properties and its protection to noise. We conclude by a detailed study of an implementation with existing circuit-QED architectures.

Here we use a slow light quantum light-matter interface at room temperature to implement an analog simulator of complex relativistic and topological physics. In collaboration with the SUNY group of Eden Figureoa, we have realized the famous Jackiw-Rebbi model (JR), the celebrated first example where relativity meets topology. Our system is based upon interacting dark state polaritons (DSP’s) created by storing light in a rubidium vapor using a dual-tripod atomic system and is based in our earlier theory proposal in 2014. The DSP’s temporal evolution emulates the physics of Dirac spinors and is engineered to follow the JR regime by using a linear magnetic field gradient. We also probe the obtained topologically protected zero-energy mode by analyzing the time correlations between the spinor components. Our implementation paves the way towards quantum simulation of more complex phenomena involving many quantum relativistic particles.

Time crystals in periodically driven systems have initially been studied assuming either the ability to quench the Hamiltonian between different many-body regimes, the presence of disorder or long-range interactions. Here we propose the simplest scheme to observe discrete time crystal dynamics in a one-dimensional driven quantum system of the Ising type with short-range interactions and no disorder. The system is subject only to a periodic kick by a global magnetic field, and no extra Hamiltonian quenching is performed. We analyze the emerging time crystal stabilizing mechanisms via extensive numerics as well as using an analytic approach based on an off-resonant transition model. Due to the simplicity of the driven Ising model, our proposal can be implemented with current experimental platforms including trapped ions, Rydberg atoms, and superconducting circuits. 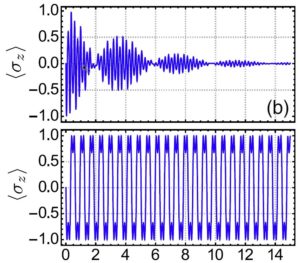 ” Pity poor Schrodinger’s cat”. As if it weren’t enough to wish a cat into a state of being simultaneously dead and alive, physicists now have an idea for how to keep it that way – and the answer is to shake it. ….”
Read more from the CQT highlight for non specialists “Shaking Schrodinger’s cat may protect it from the environment”

Abstract: We provide an analytic solution to the problem of system-bath dynamics under the effect of high-frequency driving that has applications in a large class of settings, such as driven-dissipative many-body systems. Our method relies on discrete symmetries of the system-bath Hamiltonian and provides the time evolution operator of the full system, including bath degrees of freedom, without weak-coupling or Markovian assumptions. An interpretation of the solution in terms of the stroboscopic evolution of a family of observables under the influence of an effective static Hamiltonian is proposed, which constitutes a flexible simulation procedure of nontrivial Hamiltonians. We instantiate the result with the study of the spin-boson model with time-dependent tunneling amplitude. We analyze the class of Hamiltonians that may be stroboscopically accessed for this example and illustrate the dynamics of system and bath degrees of freedom.